Interning at the UCLA Department of Radiation Oncology has given me a firsthand experience with the laboratory environment. When I arrived on my first day, I was completely clueless to the workings of a lab. Sterility? Oh yeah, I wash my hands. Flasks and centrifuges? I’ve seen pictures of them in my science textbooks. Yet little did I know how particular the lab environment was and how careless I was in being part of its workings. I opened sterile glass tubes outside the hood; I added .4 too much (which is a lot considering its minuteness) of a microliter of Ultravist to medulloblastoma cells (which could have a very likely explained for the ridiculous bell curves after using the FACS, flourescence-activated cell sorter, machine); I jumped out of fright due to the ominous noise of the 20 year old centrifuge and opened the lid too early only to discover its vortex was still spinning rapidly. Let me just tell you. Being in the lab was definitely a new experience.

But, I wasn’t the only one who was a bit “negligent” in my work. I also work alongside a graduate student researcher at UCLA named Robin. She is currently on her way to gaining a Ph.D. in biomedical physics and works in the lab as part of a 5-year lab commitment. While I am testing the sensitivity of medulloblastoma cells and possible ways to increase the effectiveness of radiotherapy while radiating the cerebrospinal fluid, Robin is working on a Seimans-funded research project regarding CT scans and cells’ sensitivity to radiation emitted from these scans. Our building didn’t have a CT scanner, so Robin, with her 12 microtubes of cells, had to walk across the street (took about 5 minutes) to the Ronald Reagan Medical Center at the Radiation Oncology sector, and use their CT scanner to perform her experiments. So, now that I’ve described my lovely friend Robin, any guesses on what went… well, wrong?

Well, essentially, nothing went wrong. But, it was her “negligence” that caused her to discover a new facet to cell sensitivity to CT-emitted radiation. When Robin walked across the street with her 12 microtubes of cells, she had forgotten one thing: sunblock for the poor little cells, or any type of shield that would protect the cells from exposure – a bucket, tin-foil wrap, anything. The next day after my professor and Robin realized her perfunctory habit of simply holding her microtubes in her two palms unshielded when she went for her daily walk across the street, they arranged a little side-step to the experiment. What if we completely shielded certain microtubes of cells from the sun but also gave complete exposure to the sun and its kink-inducing UV rays to other microtubes of cells while Robin crossed the street? (Of course, there were controls to each of these tests for effective comparison.) Would cells that had exposure to UV rays have a greater sensitivity to the CT scan than those who were not exposed? Would there be a substantial difference in results?

Turns out, there was a difference. Quite notable actually.
There was a slight increase in sensitivity and double-strand breaks in cells that were completely exposed to the sun for the short walk across the street after examination and comparison of exposed cells vs. shielded cells with the flourescence-activated cell sorter (FACS) machine. Robin is now currently combining UV Rays into her experiment.

The reaction to the results?
Quoting my professor, Dr. Kei Iwamoto, “It’s all about dang serendipity.”

(Now, this isn’t to say that negligence is equivalent to the onset of serendipity nor is it suggestive that serendipity will just be springing all over the place in your laboratory. For fellow scientists, the lab environment is anything but serendipity it seems at times. But, hey, unexpected occurrences can be fate sometimes.)

And it’s true. Serendipity has played a key role in science in regards to some of the most amazing discoveries. There is Albert Hofmann who discovered the psychadelic effects of lysergic acid diethylamide (LSD) by accidentally consuming it. Consuming it. Serendipity of its discovery, yet also serendipity that poor Hofmann only suffered well temporary repercussions. 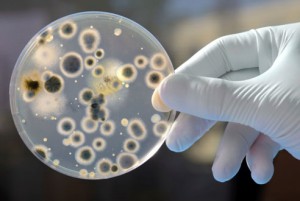 And of course, the also negligent, forgetful Alexander Fleming leaves a petri dish of staphylococcus bacteria exposed to air, causing mold to form around the bacteria. Ah luck strikes again! Turns out that the notorious old mold is indeed the modern day Penicillin. Mold became a watershed antibiotic that is now imperative in today’s society. In a way we teenagers like to rhyme things: the mold was gold. If such accident didn’t occur, would such discoveries have been discovered? Most likely in eventual time, but not in the context that it would support this first blog of mine.

So from my friend Robin to long-gone Alexander Fleming, Serendipity has been existent in laboratories everywhere. Faceless and stealthy, good ol’ Serendipity’s sneakiness has spurred the discoveries of the otherwise undiscoverable at the time. Serendipity has played a key role in the history of science and there is no sign of its contribution ceasing in the future. Geez, scientists ought to give it some credit in scientific papers once in a while, don’t you think?

And as for my friend Robin and her reaction to the results?
“Maybe I can FINALLY contribute to the scientific community!!!”
Oh Ph.D. students.

Ah, well, what can you say?
Robin couldn’t have done it without the workings of sneaky old scientist, Serendipity.

1 thought on “Serendipity: The other scientist in your laboratory”