As you have seen from my past posts, I’m in a huge dilemma. I’m an opinionated and stubborn student (and teenager for that matter). Science is an esoteric field; To say I’m of the “lost generation” is a bit exaggerative of me (I have seen and heard of too many geniuses of my age!), but it is apparent that I wish experiences with applied science were available beyond the words of my AP Biology textbook. It’s something I feel quite strongly about; after all, it comes to a point when pictures of the organelles of eukaryotes and prokaryotes start making your eyes droopy.

However, now it seems that the science god may have answered my prayers. Deviating from the ordinary lecture from my AP Biology teacher, Mr. Kays told us he was buying his own centrifuge. I was startled. Centrifuge? Those contraptions were thousands of dollars, probably worth years of what a high school 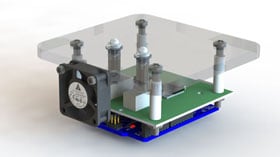 teacher earns nowadays (which is sad, isn’t it? Teachers undoubtedly deserve more recognition in their craft). He couldn’t afford such high technology. So how was Kays getting his own centrifuge?

Unfortunately, I couldn’t find the website where Kays ordered his DIY centrifuge. But, I came across another startling discovery when he told us about cofactorbio.com. Turns out, a DIY movement is underway amongst other science enthusiasts like myself who believe the academia of science is a bit “pretentious”. In the perspective of an ordinary undergraduate biology major of an overcrowded public university, one would not be able to perform individualized research until probably the junior/senior years of college (reasonable estimate). But why wait that long when you could say…

… perform a personal PCR on yourself for $149?
… or sequence your DNA to find out if you have the gene indicating a “slow/twitch muscle” for less than $100?

Yep, it’s possible. Kays told us about cofactorbio.com. The everyday lab routine PCR and amplification of DNA is available all in the environment of your household. And it’s seemingly affordable too. It may not be “pretty”. It may not be sleek and classy-looking, but it does the job. (Or so Mr. Kays says it does).

Though I may not have much evidence to the credibility and effectiveness of DIY science machinery, it’s an astounding reality that science maybe isn’t becoming as technical as I expected and was so sure about. There are enthusiasts, hardcore enthusiasts out there who have realized science’s high level of “worthiness” and “seniority”, and have made it a mission to bring the experience of professionals to the hands of people who simply (and genuinely) love science. As I have said before, sometimes words and concepts aren’t enough. Sometimes mathematical equations, data, and scientific abstracts fail to satisfy one’s implacable yearning for concreteness rather than concept.

Sometimes you’ve just got to experience science firsthand. And with such DIY equipment, why I wouldn’t be surprised if you begin finding momentous discoveries in your own garage.

For more information on DIY science, I read this awesome article on the PLoS Blogs Network, http://blogs.plos.org/wonderland/2011/09/08/neuroscience-for-everyone/. Hooray for further enlightenment!